Hazemaze Sign to Cursed Tongue Records & Ripple Music; Hymns of the Damned Due This Fall 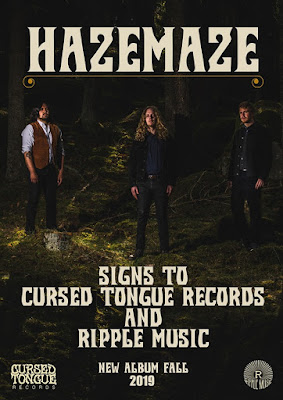 Cursed Tongue Records and Ripple Music have teamed up for a joint release of Stockholm, SE 70’s stoner doom trio Hazemaze’s dark and menacing sophomore album ‘Hymns of the Damned’. When the three Swedes released their debut album last year on German label Kozmik Artifactz it was to much applaud from the heavy underground community. Fans and critics alike acknowledge the sincerity and skill that Hazemaze exhibits on record and that has been further cemented by a string of live performances in their home country and beyond.

With the signing of Hazemaze to both Cursed Tongue Records (DK) and Ripple Music (US) the next phase in the Hazemaze evolution is ready to unfold as they will bring the power of their riffs to even further regions and new ears. The band has just finished recording of the follow-up album to their successful self-titled debut LP.

We have had a sneak-peak on the pre-production of the new album and we can ensure you that you are in for a thrilling, riff-heavy showcase of retro-tinged stoner doom from the top drawer. Brace yourself to hear Hazemaze at their darkest, most energetic and heaviest yet as they have truly upped the irons on ‘Hymns of the Damned’. Hazemaze is ready to take on the big league and are bringing the riffs the size of mountains, so get ready to be washed over with heavy, fuzzy riffs and low-ends. It’s soon time to rip it up to one this year’s best heavy stoner doom albums, ‘Hymns of the Damned. We are all damnned, we are all cursed so let the ripple of riff-waves carry us away. Get psyched!

Hazemaze is a stoner/doom power trio from Sweden that took form in the spring 2016. The band first began with the intention of becoming a garage-rock outfit, but that all changed when they come to realize that they all shared the same passion for seventies hard rock music. 6 months after, the band recorded their first EP “Wicked Ways” and began playing shows around Stockholm and other cities nearby. However, it did not take long before the band began writing more songs, which evolved into a more doom-oriented sound. Two years later, their self-titled debut album was released through Kozmik Artifactz, and the overwhelmingly positive respond, from every corner of the stoner/doom scene, helped the band break new territories and gaining recognition in the local doom scene, as well as abroad. Now it’s time for the next chapter in the story of Hazemaze, a record that is far heavier, darker and doomier than its predecessor. “Hymns of the Damned” will see the light of day in the fall of 2019.

“We are extremely excited and humbled to announce that we have signed a record deal with Cursed Tongue Records and Ripple Music for the release of our second album entitled “Hymns of the Damned”. It´s an honor to collaborate with two amazing labels that really embraces the heavy underground scene in both Europe and US, and becoming a part of that family.” ‘Hymns of the Damned’ will be out on CD and digital via Ripple Music and vinyl via Cursed Tongue Records in Fall 2019. Hazemaze is: Ludvig – Guitar/Vocals Nils – Drums Estefan – Bass All tracks written and performed by Hazemaze Recorded & Produced at Studio Underjord together with producer Joona Hassinen Track listing: TBA! 8 tracks of riff-worshipping songs:

Cities Of Mars and High Priestess are on tour in Europe 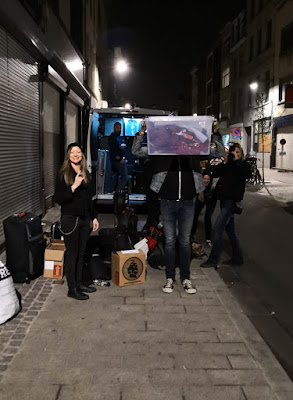 Cities Of Mars is currently on tour in Europe together with High Priestess and there are still a few dates left to Catch this legion of the Ripple Army in Germany and Denmark. 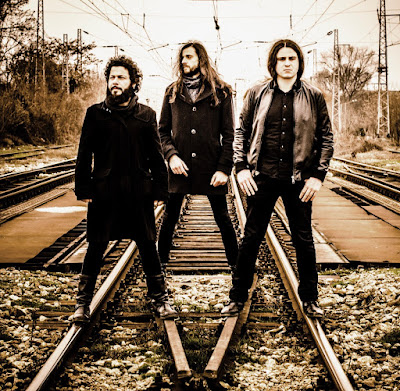 Bulgarian heavy psych trio Obsidian Sea is set to release the album "Strangers" via Ripple Music. The  new song ‘The birth of fear" is the first trip to be shared from the album set  to be released on 22nd March 2019. 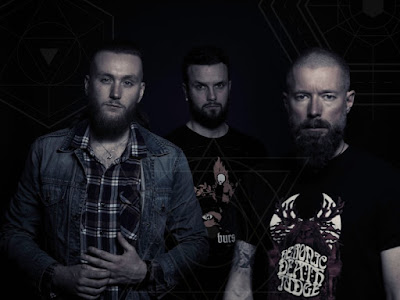 A brand new track from Swedish rifflords Cities Of Mars can be heard below. The track "Hydrahead" is picked from the upcoming Ripple release "The Horologist" is officially released on 5th April 2019.

Email ThisBlogThis!Share to TwitterShare to FacebookShare to Pinterest
Labels: Cities Of Mars

Ripple encounter of the third kind in the Netherlands 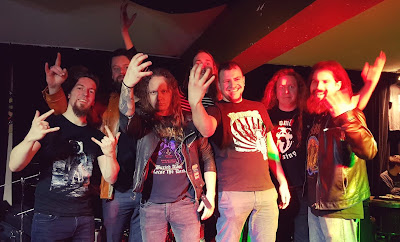 One for the family album. Swedens Nekromant crossed roads with Fire Down Below who also out and about on their recent European tour in the Netherlands.
Posted by Ripple Music Europe at 12:53 PM 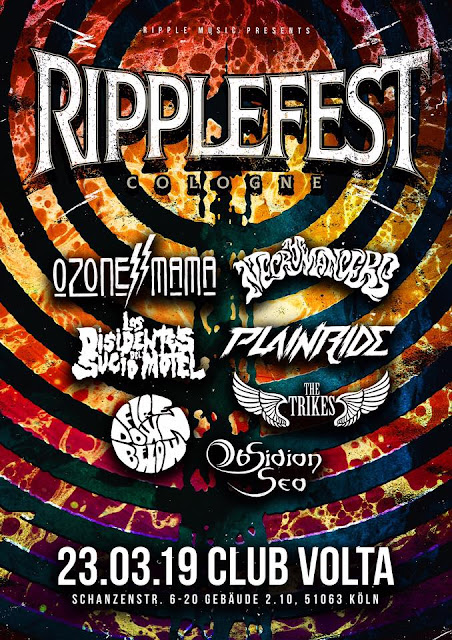 You may have heard some murmurs. Now it’s time to tell the world!RippleFest is coming to Europe! Germany precise as we welcome RippleFest Cologne to the party. 7 bands from 5 countries. All under 1 roof. Come join us!What: RippleFest Cologne
When: March 23, 2019
Where: Club Volta, Schanzenstr. 6-20 Gebäude 2.10, 51063 Cologne, Germany

Hope to see you all there!

Witchers Creed is soon upon you! 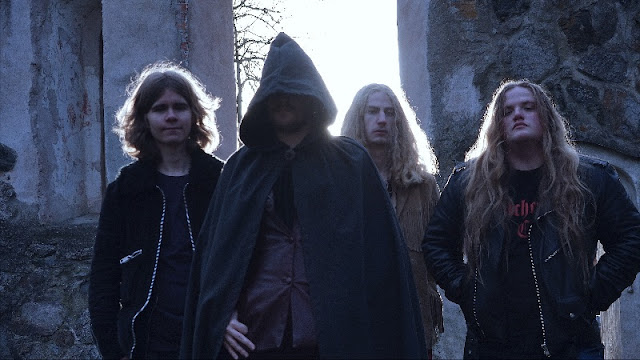 Ripple Music is thrilled to announce the release of Awakened From The Tomb…,the debut album from fledgling young doom raiders, Witchers Creed.
Founded in Katrineholm, Sweden in 2016 by guitarist Filip Andersson, bassist Emil Bjällerhag and drummer Charlie Rangstedt, while invoking the enduring sounds of acts like Trouble, Witchfinder General and Candlemass, the band are in fact one of the youngest groups to peddle their riffs amidst the current crop of Swedish Doom Metal musicals.
To go back even further to 2011, Filip and Charlie both met in seventh grade and formed a band called Illusion, inspired by cult 70s rockers November. Sharing their love of rock and metal with everyone in earshot, the pair soon recruited close friend and German classmate Emil Bjällerhag to sing lead vocals. Sadly, things went south for the ambitious young band in 2015 when they lost their drummer Leo Karlsson to personal issues, but the core of Illusion remained, and the trio talked long and hard about the formation of a new band. A new undertaking, similar in style but even heavier, meaner. They all loved Black Sabbath and that ’70s hard rock sound, along with ’80s metal and early psychedelia. As soon as the band left high school in late 2016, Witcher’s Creed was born.
There was no time to lose.
Following the release of their first demo EP in 2017 the band scored praise from across the world and within a matter of months had released a second EP, gained an invitation to major rock festival in the Ukraine and shared stages with fellow countrymen, Hypnos. Less than a year ago – shortly after coming to the attention of the prodigious record label Ripple Music at RippleFest Sweden II – the band entered Sunlight Studio, the legendary cradle of the Swedish Death Metal sound to record their debut album. Make no mistake, things move fast when you’re that good and you better believe that Witchers Creed are legends in the making. Catch them now as they step out of the grave, because who knows where 2019 will lead them.
Awakened From The Tomb… is officially released on 22nd February 2019 on Ripple Music but you can stream and share new song ‘Monolith’ ahead of it release, right here https://soundcloud.com/ripple-music/witchers-creed-monolith
Pre-order the album now at www.ripple-music.com

New additions in the European store

Latest from The Ripple Effect